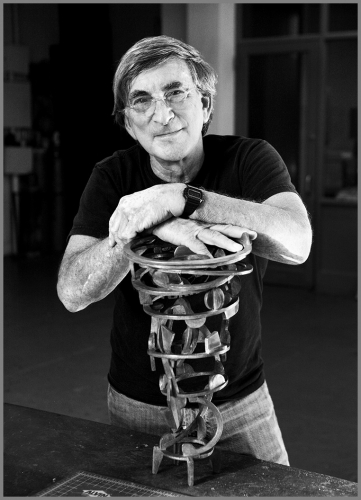 Joel Perlman is best known for his sculptures that juxtapose flat geometries of welded steel, aluminum, and bronze in three-dimensional space. His sculptures sketch themselves out in airy volumes, both glorifying and defying the weight and density of the materials.

Perlman was born in New York City where he continues to work, as well as maintaining a studio in Watermill, New York. He began welding at Cornell University (BFA 1965) and then at the Central School of Art and Design, London, and the University of California, Berkeley (MA 1967). In the 1970-90’s he had numerous exhibitions at the seminal Andre Emmerich Gallery in New York. Perlman is the recipient of a John Simon Guggenheim Foundation Fellowship, a National Endowment for the Arts grant, and a Pollock-Krasner Foundation Award. His work is included in important public and private collections including The Hirshhorn Museum and Sculpture Garden, Washington DC, The Los Angeles County Museum, California, The Whitney Museum of American Art and the Metropolitan Museum of Art, New York.